SKIP THE SHIPPING – BUY ONLINE & PICK UP AT OUR VANCOUVER WAREHOUSE

SKIP THE SHIPPING – BUY ONLINE & PICK UP AT OUR VANCOUVER WAREHOUSE

Fitness Town was proud to donate fitness equipment to the Canadian Olympic Snowboard Cross team so they could continue their training while on the road to the 2018 Olympic Winter Games in PyeongChang! With seven medals in only five Olympic Games, Canada is one of the top snowboarding nations in the world. Canada has won at least one Olympic medal in every snowboard discipline except Halfpipe and Big Air, which debuted in PyeongChang. Snowboardcross took place at Phoenix Snow Park on February 15-16 (Days 6-7). Unfortunately, Team Canada did not receive an Olympic medal in the 2018 Olympic Snowboardcross competitions, but Fitness Town is honoured to support Canadian athletes pursue their dreams. The athletes were selected based on their performances in FIS World Cup and World Championship events between July 1, 2016, and January 21, 2018. See below for pictures of their training sessions on the road!

The snowboarders representing Team Canada in Snowboardcross were: 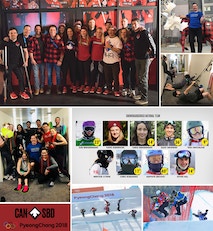 The Canadian Snowboardcross Team is trained by Anthony Findlay of West Vancouver BC – Owner and Head Strength and Conditioning Specialist at Level 10 Fitness and Health.

At Canada Snowboard, we believe that embracing the culture of snowboarding combined with a commitment to excellence is the foundation of who we are. Performance at the highest level comes from an athlete-focused approach to training, programs and coaching. Our athletes are amongst the best in the world, and our goal is to continue to provide them with the means to achieve their goals. For more information on the Nation Team: https://www.canadasnowboard.ca/en/team/snowboardcross/

Unsubscribe at any time.